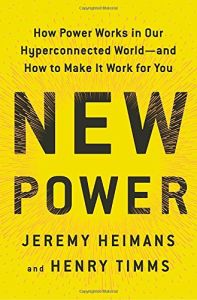 The review below was first published in the getAbstract Journal on May 27, 2021.
We’ve reviewed this title for you as we currently cannot offer a summary.

Power of the Crowd

Social-engagement experts Jeremy Heimans and Henry Timms explain that movements like #MeToo exert a new form of power that is participatory, collaborative and connected.

Fueled by social media’s reach and massive popular appeal, this power flows person to person in businesses like Uber, movements like Black Lives Matter and even terrorist groups like ISIS. New power, the authors say, is the power of the crowd. They assert that it will define the social, political and economic future. And they should know.  Heimans is CEO of Purpose, which builds and supports social movements, and Timms is president and CEO of the 92nd Street Y, co-founder of #GivingTuesday and founder of GetUp!, the massive non-partisan Australian political organization.

8
Article
6 Questions for the Boss Who Wants You Back in Your Cubicle
9
Book
The Burnout Fix
9
Video
Exploring Personal Projects
7
Report
What Is Venture Debt?
8
Book
Robert's Rules
9
Article
The Value of Dyslexia