Review of Nickel and Dimed 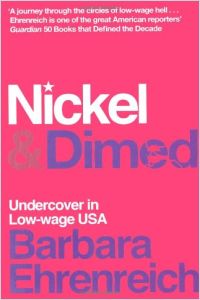 The most unsettling aspect of Barbara Ehrenreich’s eye-opening foray into the world of the working poor is that the situation has gotten worse. The United States’ economy was booming in the late 1990s when she began her project, reporting about working anonymously in minimum-wage jobs. Though she steps in and out of the lives of the minimum-wage workers who befriend her, she is a very powerful, effective advocate for them. In her book, she shows that living decently on minimum wage is impossible. However, Ehrenreich gives it a try in three cities, working as a waitress, housekeeper and Wal-Mart clerk. Her narrative flows effortlessly as she enlightens, educates and entertains.

In 1998, Barbara Ehrenreich, an educated author, accepted a challenge from a magazine editor to join the working poor and write about the experience. Welfare reform was pushing millions of Americans into the workforce. Studies already had shown that surviving on minimum wage without government assistance was impossible, but Ehrenreich tackled the project anyway. She wanted to learn firsthand about life on the edge. She worked for poverty-level wages for a month each in Florida, Maine and Minnesota.
Ehrenreich established three rules for herself: She would not rely on any of her professional skills. She had to accept the best-paying job she could find and work earnestly to keep it. And, she had to live in the cheapest place that offered reasonable privacy and safety. She applied for jobs pretending to be a divorcee with little experience who was returning to the workforce after many years. She did make a couple of concessions. She insisted on having a car, and she wasn’t willing to be homeless or without food. In an emergency, she would use her ATM card. But her goal was to spend a month in each place, land a job and make enough to pay for another month’s rent.

Ehrenreich’s research begins in Key West, Florida, close to her home. Within the construct of her reporting challenge, she is unable to afford the $675 monthly rent at an area trailer park, so she rents a small cabin inconveniently located 30 miles from town. After applying at about 20 places, Ehrenreich is hired as a waitress at the Hearthside restaurant. She makes $2.43 an hour plus tips, working from 2 to 10 p.m. 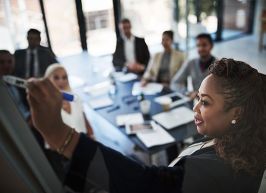