Summary of Notes on Financial System Development and Political Intervention 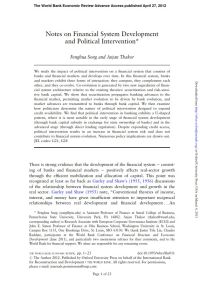 Economists Fenghua Song and Anjan Thakor reflect on the ongoing economic debate about financial system architecture. In this report for the World Bank, they answer two questions: How do banks and capital markets interact at different stages of economic development, and what impact does political involvement have on growth? The authors develop a theoretical framework that posits the development of banks and capital markets as complementary, each spurring the other to greater efficiency. The increasing use of securitization – a strategy that capitalizes on the strengths of banking and capital markets – enables this “co-evolution” of markets and banks. The authors’ findings will matter to economists and policy makers who are weighing political intervention in their financial systems. getAbstract recommends this instructive research primarily to policy makers, economists, and students of finance and economic development.

Fenghua Song is an assistant professor of finance at Pennsylvania State University. Anjan Thakor is a research associate with the European Corporate Governance Institute and a finance professor at Washington University in St. Louis.

Since the 1950s, economists have known that traditional economic theories don’t pay enough attention to the “reciprocal relationships between real development and financial development.” Economic scholars agree that the financial system plays a vital role in economic expansion and in the efficient allocation of capital, but they are less certain about exactly how the financial infrastructure affects the real economy.

When economists study financial sector architecture and its impact on the disbursement of credit, they traditionally classify nations’ financial systems as either “bank-based” or “market-based,” depending on how much financing takes place through banks and capital markets. Economists find little conclusive evidence to point to either approach as better at promoting economic growth.

The common wisdom was that banks compete against capital markets, so policy makers sought to balance the development of these two financial system components. They’ve since had to re-examine this stance, because securitization – a strategy that employs the strengths of both banking and capital markets – has eroded the boundaries between banks...

The Economics of Higher Purpose
9