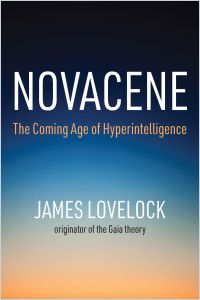 James Lovelock introduced the Gaia hypothesis in the 1970s. Gaia, he argues, is a living system that connects all things and maintains Earth’s temperate climate. Humans disrupted this delicate barometer with the “age of fire” – the Anthropocene – by transforming the planet on a massive scale. The Novacene, a new era in which humans and artificial intelligence will work together to preserve life on Earth, now begins. Expansive and eloquent, Lovelock – at age 100 – ponders his deep love for all existing life, and offers hope for the age to come.

Fellow of the Royal Society and Companion of Honour James Lovelock, is originator of the Gaia hypothesis – now Gaia theory. His books include Gaia: A New Look at Life on Earth; The Revenge of Gaia; The Vanishing Face of Gaia; and A Rough Ride to the Future.

In considering humans’ place in the cosmos, remember that the cosmos is where living things can think about their own existence. Any other theory would have to discount human existence altogether. While some people may ascribe human evolution as the product of simple luck, or guided by a benevolent God, or a feature of one universe among many universes, it may be that intelligence drives all creation. Humans then, are a tool created by the cosmos to “explain itself.” As such, humans are only one stage in a self-revelatory process, not its conclusion...

Symphony in C
9
Beyond Global Warming
7