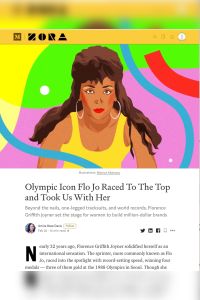 Olympic gold medalist Florence Griffith Joyner shattered track records in the 1980s but faced scathing scrutiny for her flamboyant style and had to overcome racist barriers to achieve financial success. Penn State professor and historian Amira Rose Davis shows how track legend “Flo Jo” parlayed her controversial persona into an enduring brand while paving the way to mainstream acceptance for black women athletes as they build their own brands and express themselves without apology on and off the field.

Amira Rose Davis teaches History and African American Studies at Penn State University and co-hosts the podcast Burn It All Down, focused on the intersection of feminism and sports.

As a track star, Flo Jo ran in one-legged track suits she designed herself, and sported long, brightly painted fingernails. She died in 1998, but her style, passion and courage continues to influence culture and fashion.

Florence Griffith was born in Los Angeles, the seventh of 11 children. She learned to be fast to get what she wanted, since competition for resources was always fierce. Her mother moved the family to the LA neighborhood of Watts after separating from Florence’s father. Watts was a crucible for racial tensions between over-aggressive police and communities of grinding poverty.

After the 1965 Watts riots, Griffith took up track at the Sugar Ray Robinson Youth Foundation and immediately won races. She continued with track in college, eventually representing UCLA on a powerhouse team that included Jackie Joyner-Kersee, coached by Bob Kersee. While at UCLA, Florence met Joyner-Kersee’s brother, Al Joyner...

Race and the Newsroom
8
Generalise, Don’t Specialise
8
From “Poor as Hell” to Billionaire: How Tyler Perry Changed Show Business Forever
9
Gen Z Trends Report
9
What Does It Mean to Be a “Karen”? Karen Explains.
8
The Substackerati
8