Summary of On Digital Disinformation and Democratic Myths 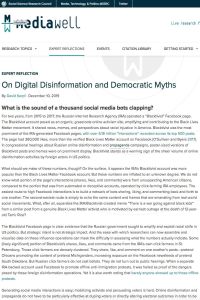 Between 2015 and 2017, a Russian organization ran a Facebook page promoting issues related to the Black Lives Matter movement. Designed to sow racial division in the American electorate, the site’s posts received countless likes and shares, but its effect on ordinary Americans remains unclear: most of the attention came from Russian “click farmers.” David Karpf, writing for Mediawell, says that while it’s hard to generate attention on social media, it’s even harder to convince people to vote. Nevertheless, digital disinformation campaigns can damage the functioning of a democracy. This article will engage anyone concerned about the integrity of American elections.

Digital disinformation campaigns don’t have to succeed in deceiving citizens in order to damage democracy.

The Russian Internet Research Agency (IRA) ran a Facebook page from 2015 to 2017 posing as an American activist site promoting issues related to the Black Lives Matter movement. The site now appears to be an attempt by the Russian government to sow or exacerbate racial division within the American electorate.

The site’s hundreds of posts garnered more interactions than the official Black Lives Matter website, but it remains difficult to assess the IRA’s impact on ordinary citizens: Most of the responses to the page came from digital bots and IRA employees in St. Petersburg.

The people sharing and liking the posts weren’t all from Ohio or Michigan, and they don’t vote or appear at demonstrations. Generating a lot of attention on social media isn’t hard, but getting people to vote or show up at an event is even more difficult. Disinformation campaigns may not manipulate people’s beliefs and behavior, but they can, nonetheless, subvert the...