Summary of On the Judgment of History 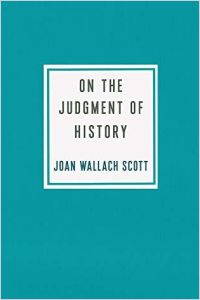 People discuss the lessons of history as if history itself is a moral arbiter. Everyone wants to end up on the “right side of history,” as professor Joan Wallach Scott explains. The Nuremberg Tribunal put history on trial. South Africa’s Truth and Reconciliation Commission exposed apartheid’s crimes and opened the way to a better future. Supporters of reparations for slavery argue that equality requires acknowledging slavery’s ongoing impact. The past and the future may seem clear-cut, but gauging history’s impact on the present is complicated and messy. Scholarly yet elegant, Scott’s book addresses how history’s traumas encroach on today’s political and moral reality.

Joan Wallach Scott is Professor Emerita in the School of Social Science at the Institute for Advanced Study. Her most recent book is Knowledge, Power, and Academic Freedom.

The “judgment of history” depends on seeing history as a straight line.

People often think of history as an arbiter or judge, a kind of mechanism that sorts and evaluates human events. People hope to end up somehow on “the right side of history.” They like invoking Rev. Martin Luther King Jr.’s statement that “the arc of the moral universe is long, but it bends toward justice.” Yet in recent history, some evils of the past that most people thought they had rectified have surged back into the reality of the present. During the 2017 street demonstrations in Charlottesville, Virginia, people flew Confederate flags and displayed “Heil Hitler” salutes, as though slavery hadn’t ended and the Nazis hadn’t lost.

The idea that history itself is the ultimate and autonomous moral arbiter and judge is enormously appealing. It suggests hard and fast distinctions between right and wrong, fairness and unfairness, and good and evil, and implies that history itself can swoop in and repair humanity’s failures. This positions history as a kind of rational, secular version of Christianity’s last judgment.

This is an Enlightenment concept of history ...