Summary of Oprah Winfrey on Career, Life, and Leadership 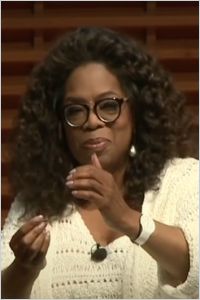 In this Stanford Graduate School of Business interview, Oprah Winfrey discusses her first media job and the factors that guided her career. She began in television at 19 co-anchoring a news show, embarking on a career path that led to her 25 years of The Oprah Winfrey Show. Winfrey explores her motivation and decision-making process. She refused to do any more confrontational talk show segments in the 1990s, after an interview with a Ku Klux Klan member and an adulterer. Winfrey explains that she focuses on following her internal voice to help people connect with themselves and define their purpose.

Oprah Winfrey was interviewed at the Stanford Graduate School of Business in 2014. Her interviewer, a student named Amanda, is not otherwise identified in the broadcast.

Oprah Winfrey became a talk show host when the station she worked for couldn’t fire her from her news broadcasting job.

The men in charge of Oprah Winfrey’s news show were going to fire her, but she was under contract, so they moved her to a talk show instead. Winfrey found her home in broadcasting interviewing everyday people – not reporting on them. The talk show had a 25-year run, and now as head of her OWN network, Winfrey still makes decisions about programming and business by clearly defining her intentions and paying attention to her instincts.

This student-led Stanford Graduate School of Business interview with Winfrey occurred in 2014 shortly after she completed her final season of The Oprah Winfrey Show. The student interviewer centers her questions around three of Winfrey’s quotes, and explores her background and career path, self-knowledge and decision-making strategies.

When she entered kindergarten...