Summary of Our Kids 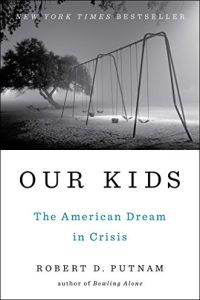 Harvard public policy professor Robert D. Putnam documents the tragic plight of the American dream of upward mobility. His case studies, statistics and charts illustrate how the lower class has diverged from the middle and upper classes in economics, education, health and other areas. The personal accounts of people struggling against overwhelming and multifaceted circumstances will break your heart. getAbstract recommends Putnam’s presentation to educators, parents, politicians, policy makers, NGOs, and anyone interested in creating a more functional, fair society in the United States.

Robert D. Putnam is Malkin Professor of Public Policy at Harvard, winner of the Skytte Prize and the National Humanities Medal, and author of American Grace and Bowling Alone.

What Happened to the American Dream?

In the 1950s, Port Clinton, Ohio, offered a solid portrait of the American Dream. Minorities and women suffered social repression, but income inequality was relatively low. People from different classes mixed socially and often intermarried. Communities were strong, and children born to poorer families had a chance to improve their economic circumstances.

Consider Don. His father worked two jobs. The family didn’t eat out or take vacations, but they owned their home. Though neither of Don’s parents graduated from high school, they encouraged him to go to college. He attended a state college and became a minister. Richer kids in Port Clinton, like Frank, had advantages Don lacked. Frank was the first kid in his class to get braces. Frank had more financial security, but his life’s path – pursuing a career in journalism and running the family business – did not differ qualitatively from Don’s.