Summary of Over a Barrel 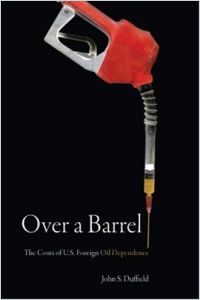 This ambitious, scholarly book, complete with statistics and charts on all things oil, undertakes the difficult task of measuring the price of U.S. dependence on this energy source. A comprehensive political and military history, it explains the geopolitics behind U.S. energy policy and analyzes its intended and unintended consequences, especially during today’s period of scarce energy. Duffield proposes solutions to the strategic problems U.S. policy creates, even though some of his suggestions are not quantifiable or easily achieved. getAbstract recommends this book to energy and utility company executives, government officials and other serious readers who want to understand the numbers and history behind this international dilemma.

John S. Duffield is professor of Political Science at Georgia State University. He is the author of Power Rules: The Evaluation of NATO’s Conventional Force Posture (1995) and World Power Forsaken: Political Culture, International Institutions, and German Security Policy After Unification.

During the 1940s, the U.S. was a net exporter of oil. But today, the country imports about half of the 12 million barrels of oil it consumes daily. The situation will only get worse, as oil demand increases and along with it, reliance on imports. By 2015, U.S. demand will rise to between 13 and 15 million barrels daily.

Oil is expensive because of overconsumption, inconsistent energy policies and unstable supplies. One study found that from 1970 to 1999, the U.S. spent about $7 trillion on oil. Yet successive presidential administrations failed to undertake serious conservation programs. Instead, their policies increased the nation’s reliance on foreign oil. Even after the oil price increases of 1973, the government’s approach to energy management did not change.

Using foreign oil enabled the U.S. to conserve its own domestic supply of oil, much of which it leased or sold. Various administrations have attempted to solve the problem of oil dependency by imposing import restrictions, trying to avert future oil disruptions, devising ways to cushion economic shocks caused by them and gaining wider access to oil supplies. To decrease demand, the ...