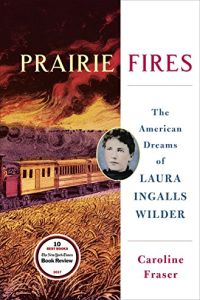 The Little House on the Prairie series tells the tale of a loving pioneer family, stalwart and hopeful in the face of unrelenting hardship. Laura Ingalls Wilder’s books are children’s literature classics that became a well-regarded television series. However, although both Wilder and her daughter, Rose Wilder Lane, asserted the truthfulness of every detail of each Little House book, time has uncovered a different story. Biographer and historian Caroline Fraser aims to set the record straight. Beyond the history of the books, she recounts the personal history of a woman and her family set against the westward growth of a booming America built upon the myth of the fearless, stoic, self-reliant pioneer. Beyond the Little House stories, Fraser unfolds the saga of how Laura’s daughter, Rose Wilder Lane, ill-used these tales for her own purposes. She and her heir, Roger MacBride, appropriated the stories to underpin a Libertarian political agenda.

Fraser presents a twisty path of two women’s separate biographies interwoven with history. The public saw the Little House books as examples of American pioneers overcoming adversity. But, as Fraser recounts, Wilder – while telling compelling, touching stories set in the pioneer west of her memory – also scrubbed the narrative clean of many sorrowful events and  family struggles.

Fraser’s Pulitzer Prize–winning biography will mean different things to different people: Wilder fans and scholars will care about setting the editorial record straight and getting to know Laura Ingalls Wilder better. Historians of the American West or the Libertarian Party will relish Fraser’s in-depth information. Understanding the harsher realities of Wilder’s life may either illuminate these beloved stories for adult readers or, perhaps, dim their shine as Fraser takes some air out of the myth of the self-reliance homesteader. getAbstract recommends Fraser’s achievement in bringing Laura Ingalls Wilder, her family and her times to vivid life while separating fact from fiction.

Fraser offers these insights and lessons:

Caroline Fraser, the editor of the Library of America edition of the Little House series, also wrote Rewilding the World and God’s Perfect Child.

1. The Little House stories have truth in them, but they aren’t completely true.

The stories that make up Laura Ingalls Wilder’s Little House series reflect the history of the farmers, pioneers and families who migrated to the American West. The Ingalls family tried homesteading in Wisconsin, South Dakota, Kansas, Iowa and Missouri. Laura began working at age nine, taking odd jobs. Her income was critical to her family’s survival.

2. The Ingalls family’s difficulties as pioneers belied the myth that settlers fulfilled the American dream.

Economic depressions drove the Ingalls family ever westward. In 1853, Charles Ingalls moved to Wisconsin where he met and married Caroline Lake Quiner. They migrated to Big Woods in Pepin County, where their daughter Mary was born in 1865. Laura was born two years later, in 1867. Her younger sisters Carrie and Grace followed. Pepin County became the setting of Wilder’s first book, Little House in the Big Woods.