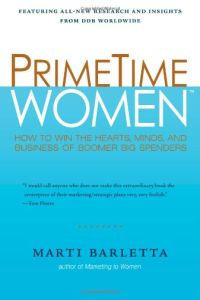 Marti Barletta follows up her earlier book Marketing to Women with an in-depth analysis and prescriptive approach to selling to the largest, most powerful market segment in the US: 50- to 70-year-old “PrimeTime Women.” Far from being an economically dormant audience of middle-aged or senior citizens, PrimeTime Women have come of age. They have money and the “moxie to spend it.” Barletta analyzes how the life-stage changes women undergo in midlife affect the ways you should market to them. She offers a generous toolbox of strategies and techniques to help you reach this audience through its “social values, life/time factors, decision styles and communication keys.” Her case studies illustrate how two companies integrate these sales principles with amazing results. Barletta often winks at her readers with wry parenthetical humor, and she sprinkles the conversation with lively consumer quotes. getAbstract highly recommends this worthy resource to marketers aiming for the hearts, minds and wallets of PrimeTime Women.

Marti Barletta founded The TrendSight Group, a consultancy that helps companies market to women. She also is the author of Marketing to Women.

“The Power of the PrimeTime Purse”

Women from ages 50 to 70 have much more consumer buying power than marketers historically have assumed, and they have gained increased marketplace heft in the 21st century. Women’s decision-making and spending habits are different from men’s at all ages, but the unique attributes and consumer behaviors of this group of women make them a vital, vibrant – if often underrated – audience.

The US adult population will grow by 22.9 million between 2006 and 2016, including 22.1 million who will join the older-than-50 crowd, a significant majority of them female. Baby boomers currently make up most of the “PrimeTimers,” but as boomers pass through this demographic, aging Gen X and Gen Y consumers will replace them in the PrimeTime marketing cohort. The same marketing principles will apply to the age-50-to-70 population in the future.

Boomer women’s socioeconomic strides put them eons ahead of their mothers and grandmothers. They are college educated, enjoy enhanced reproductive and property rights, hold better-paying jobs and now launch 70% of all new businesses. While men’s inflation-adjusted median income rose only 8% from 1990 to...