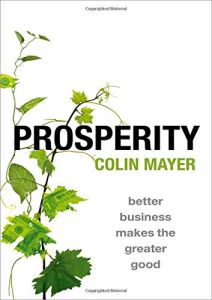 Whether you believe that they hold constitutional rights or that they are simply legal and tax structures, corporations are no doubt among the most important drivers of employment, income and wealth creation. But the same firms that produce the world’s abundance of goods and services also release toxic byproducts into the economic, social and environmental ecosystem. In this thought-provoking work, professor Colin Mayer argues that corporations must set a new course. Executives, investors and elected officials will find this a compelling thesis on the role of the corporation.

In the “Friedman Doctrine,” economist Milton Friedman set the tone for the modern corporation.

In the 1960s, economist Milton Friedman’s influential Capitalism and Freedom set the tone and direction for the modern corporation. Friedman posited that companies do not exist for social change or environmental stewardship but rather for the single-minded pursuit of profit for shareholders. He asserted that a corporation’s exclusive responsibility is to use its resources to maximize profits, so long as it does so in a transparent, free and competitive market. Yet executives’ reliance on the Friedman Doctrine, with its emphasis on producing gains for shareholders, has created myriad social, governmental, and economic problems and distortions. Strict observance of the Friedman Doctrine has been the source of much environmental destruction and social fragmentation.

The Friedman Doctrine’s time has passed. It is no longer a viable and responsible template for the conduct of business. Commercial, political and social leaders must formulate a new model and dynamic: a commitment to advancing the interests of a diverse...

Colin Mayer is a professor of management studies at the Said Business School at the University of Oxford.