Summary of Putin the Great 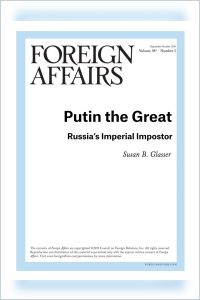 Russian President Vladimir Putin marks his 20th anniversary in power in 2019. Former Moscow co-bureau chief for the Washington Post, Susan B. Glasser, offers her assessment of Putin’s reign in an article in Foreign Affairs. Her explanation of Putin’s political thinking and the West’s failure to come to grips with it provides valuable context for anyone following international affairs.

Susan B. Glasser is a staff writer for The New Yorker and former Moscow co-bureau chief for the Washington Post.

Putin’s tsar-like rule has enabled Russia to reassert itself on the global stage and become a model of modern authoritarianism.

Russia’s President Vladimir Putin claims to model himself on Peter the Great. Although outside observers often compare him to Soviet leaders, Putin’s worldview more closely resembles the ideological doctrine of “Orthodoxy, Autocracy, Nationality” espoused by the Russian tsars. As the number of democracies in the world has been shrinking, Putin’s Russia has emerged as an alternative to liberalism and a model of modern authoritarianism.

Since becoming Russia’s leader at the end of 1999, Putin has centralized his authority at home and worked to restore Russia’s place as a global power. He has projected Russian power abroad by invading Georgia and Ukraine, meddling in...