Summary of Race Against the Machine 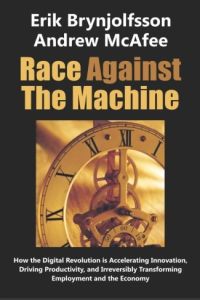 The slogan of General Electric’s 2012 advertising campaign is “Brilliant machines are changing the way we work.” Instead, it could be “In the future, brilliant machines will do all the work.” As management professor Erik Brynjolfsson and scientist Andrew McAfee point out, this notion is not far-fetched. They speculate that, given the exponential increases in raw computer power, machines will do many jobs that humans perform today. The authors, who are not technophobes, offer 19 solid, if perhaps unrealistic, suggestions for steps government can take. getAbstract recommends this short, fascinating, but scary, treatise to those interested in the influence of advanced technology on the US labor market and to anyone wondering how government can keep people gainfully employed in future.

Computer technology is upending society and causing dramatic changes. Technology and machines have replaced workers and now do their jobs better, faster and cheaper. More workers will suffer the same fate, not just due to machines’ effectiveness but also because technology does not ask for vacation pay, benefits or sick leave.

During the summer of 2011, the recession began to ease, and the US economy started to recover. In July, 117,000 new jobs opened up, more than twice the number of new jobs created during the previous two months. But the US was not out of the woods. That same month, unemployment hit 9.1%, not much better than during the worst point of the economic downturn.

Many observers did not understand what was happening. How could so many workers be unable to find work when economic indicators were relatively positive? GDP growth was not bad. Businesses were ringing up record profits. Economists had declared the recession on the mend. Returns on investment in equipment were sound.

Normally, when profits are up and companies invest, they open their doors to new workers – but not this time. What happened to all the jobs...