Summary of Raise Your Game 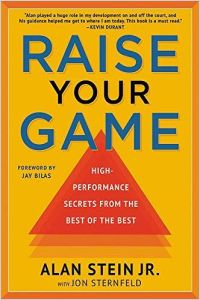 At sports fantasy camps, middle-aged, superstar CEOs, billionaire entrepreneurs and other business honchos compete with each other on the basketball court for a few days of fun and coaching. Corporate performance coach Alan Stein Jr. knows this take-no-prisoners world well. In his book, co-authored with Jon Sternfeld, Stein provides a captivating insider’s look at a testosterone-drenched Las Vegas sports fantasy camp, explains why commercial competition is so similar to sports competition, and details the vital life lessons business leaders can learn from professional athletes and famous head coaches.

Former basketball coach Alan Stein Jr. is a corporate performance coach and speaker. Jon Sternfeld is the co-author of A Stone of Hope: A Memoir with Jim St. Germain and Strong in the Broken Places: A Memoir of Addiction and Redemption Through Wellness with Quentin Vennie.

Success depends on tightly focusing on the basics.

As UCLA’s head basketball coach, John Wooden won 10 national championships, including seven in a row. Since the end of UCLA’s winning streak in 1973, only two Division One basketball teams – Florida and Duke – have won back-to-back championships.

Wooden was a standout coach because he worked hard, paid attention to details and stuck to the hard, unsung, dirty work of the basics. At the opening of each season, he would teach his players how to “put on their socks and shoes.” With any other coach, 18-year-old basketball players might laugh at these instructions, but his athletes followed his advice. Were Wooden’s socks-and-shoes regulations micromanagement gone haywire? Not at all. Few of his players suffered blisters, rashes or “chaffing.” In contrast, their opponents often suffered aching feet by the end of their games. It’s tough to play winning basketball when your feet are on fire. For Wooden, winning required controlling every game factor he could command and not wasting his time on anything else.