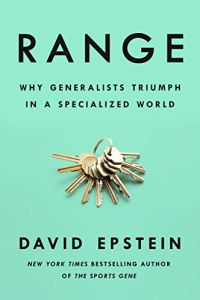 Sportswriter David Epstein uses fascinating research and historic examples to argue that today’s businesses need generalists more than they need specialists. Leaders often praise specialists for efficiency, diligence and intensity, but computers now can assume many of their detail-oriented tasks. Knowledge economy leaders need to focus more on integrated learning and lateral thinking to be better forecasters and problem solvers. As Epstein provocatively shows, a specialist’s efficiency often comes at the cost of ingenuity or common sense. Instead of specializing, especially early in your career, he says, explore and diversify your interests.

David Epstein is the author of the New York Times bestseller The Sports Gene. He is a senior writer for Sports Illustrated and has earned awards from the National Academies of Sciences, Engineering and Medicine, the Society of Professional Journalists, and the National Center on Disability and Journalism.

The idea that having a “head start” in one field makes you more successful is a myth.

Epstein reports that Tiger Woods, who became one of the greatest golfers in history, held his first golf club when he was 18 months old. Roger Federer, on the other hand, “sampled” various sports before settling on tennis in his teens, and he, too, became a world champion. Woods’s success spawned books hyping the importance of the head start.

Both athletes, Epstein point outs, engaged in “deliberative practice” – following explicit instructions on the basis of the best methods known – to become champions. However, some of the world’s greatest innovators became specialists later in life, and almost all had concurrent interests in non-domain-specific fields. While early specialists might have an advantage at the start of their careers, the author notes that late specialists typically find employment that is a better match for their skills and abilities. “Hyperspecialists” are more prone to overconfidence in their abilities, which can lead to dangerous mistakes. “The most successful experts,” Epstein writes, ”also belong to the wider world.”