Summary of Reprogramming the American Dream 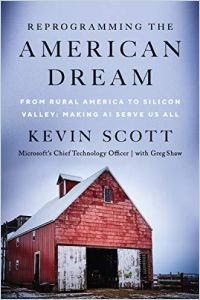 This book by Microsoft’s chief technology officer Kevin Scott offers his inside knowledge of the latest advances in AI. That, plus his rural upbringing, fuel his unique view on the AI revolution. Scott unabashedly champions AI –and his firm’s role in it – and its potential to help solve the “digital divide” between the rural and urban United States, and perhaps reduce political partisanship, too. While Scott presents a balanced view of a better future, it’s one, however, that might disproportionately benefit existing power centers – unless developers, investors, governments and citizens work to make AI accessible to all.

Artificial intelligence (AI) will create vast wealth. Whether the benefits accrue to a few or to everyone depends on choices people make now.

Two story lines dominate the AI narrative: a utopian fantasy of smart robots enabling a life of leisure, or a dystopian future in which the few who control and develop AI get rich while everyone else loses their livelihoods. For the foreseeable future, AI will increase automation and create good jobs.

Firms that develop AI and investors that fund it must do so with the good of everyone in mind. Policy makers must devise and enforce ethical ground rules that promote equal access to AI. Urban and rural workers and communities can benefit, but only through the deliberate actions of individuals, governments, and those developing AI products and AI itself. Informed, participatory democracy can avoid the concentration of power and wealth among only a few.

Microsoft and Google will spend about $3 trillion on advancing AI over the next 10 years. Some argue that firms and governments should focus AI on solving the world’s biggest challenges, like hunger and climate change. They should, but current AI faces quotidian challenges – ...