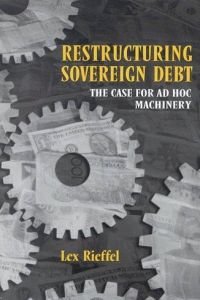 Author Lex Rieffel writes with authority on the history of developing countries' debt crises. He describes this difficult and complex subject concisely and meticulously. To be sure, he wrote this text as an argument for a specific policy objective (keeping flexibility in the sovereign debt workout process), and does not shy away from hammering his point home multiple times. However, his agenda in no way diminishes the accuracy of his history or his factual descriptions of the entities that shaped it. The first four chapters are an excellent primer on the subject, and could stand alone. The later chapters provide a wealth of detail, perfect for those who need it, albeit a bit tedious for anyone not directly involved in sovereign lending. getAbstract recommends this book to bankers involved in making loans to foreign countries, to government policymakers in borrower countries and lender countries, and to anyone seeking a detailed exploration of how countries pay their debts.

Lex Rieffel spent 18 years with the U.S. Treasury Department, participating in negotiations, with borrower nations working with the International Monetary Fund and helping the countries of Eastern Europe and the former Soviet Union. He then spent seven years as the senior adviser for multilateral policy issues at the Institute for International Finance. He is currently teaching, consulting and writing.

Anatomy of a Workout

Governments and government agencies borrow money, just as individuals and corporations do. The money owed is called sovereign debt, to distinguish it from the debts incurred by people and companies. An individual country's laws cannot regulate sovereign lending. Yet, no international mechanism exists for enforcement of debt contracts. For example, when a country becomes unable to pay its debts, creditor countries do not use force to compel payment, as loan sharks do to unfortunate borrowers. Neither can they liquidate an entire country in the way creditors can shut down a bankrupt company and sell off its assets.

Instead, when a national debt payment crisis occurs, creditor countries (and companies) work with the debtor country to create a revised payment plan, called a debt workout. Two main types of workouts exist, each with several subcategories: