Summary of Riding the Waves of Culture 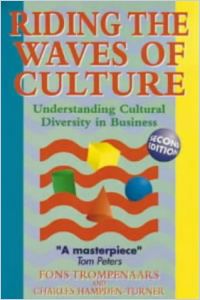 The results are in: All of those stereotypes that we’ve been told to forget are, in fact, true. At least, that’s what a survey of 30,000 people from 31 nations suggests. The data paints some familiar pictures: the inflexible German, the vacillating Frenchman and the pushy American. The statistics from the survey support the conclusions reached by authors Fons Trompenaars and Charles Hampden-Turner in the earlier, first edition of this book: Don’t base business decisions on the rhetoric that people are the same regardless of race, color or creed. They aren’t! Academically organized, dense with anecdotes and, this time, thoroughly documented, Riding the Waves of Culture is entertaining at least, and possibly essential in this global age. getAbstract recommends this book to any professional approaching an international management task, or overseeing a business that stretches across regional boundaries.

Culture is the method through which human beings – and the nations and organizations they create – organize meaning. It can be seen in the way the members of the culture behave in response to family, strangers, nature, gestures, signals and tribulations.

There are several generally accepted cultural orientations that emerge when individuals interact, some of which are complementary, while others are in direct opposition to one another.

The universalist, for example, thinks that good can be accurately delineated and followed as a rule. The particularist, on the other hand, argues that rules are made to be broken. A person who believes that the will of the people is more important than the ideas of one man might be called a communitarian, as opposed to an individualist.

The significance of these cultural orientations becomes clear when they are put into practice. For example: You are riding with a business associate who strikes a pedestrian while traveling at a speed faster than the posted limit. Your associate wants you to tell the judge he was not speeding. What right does your associate have to expect you to lie on his behalf...