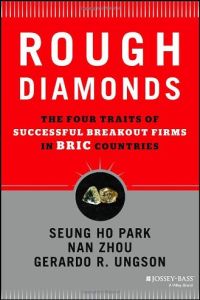 Economists Seung Ho Park, Nan Zhou and Gerardo R. Ungson catalog the least-known, best-performing companies in Brazil, Russia, India and China – the BRIC nations. Sorting through more than 105,000 BRIC firms to select 70 “rough diamonds,” they examine how these potential future gems achieve strong business growth, predict why they could sustain that growth – and explain how they change the rules of the game. National business climates in the BRICs have hit unexpected turbulence since this 2013 study appeared, but getAbstract still recommends these corporate profiles as a good look at the firms that are distinguishing themselves in the BRICs.

Seung Ho Park is the executive director of the Institute for Emerging Market Studies, where Gerardo R. Ungson is a nonresident senior research fellow. Nan Zhou is an assistant professor at SKOLKOVO Business School.

The 2007 to 2009 recession hurt national markets in the West, but national economies in emerging markets showed growth during that period, reaching five percentage points higher than Western nations. The hottest post-recession markets were Brazil, Russia, India and China – the BRIC nations.

The locus of economic development in the BRICs is a subsidiary tier of entrepreneurial firms with strong growth rates. These firms include “rough diamonds” – breakout companies that demonstrate significant long-term promise. No other BRIC firms matched their annual growth rates – 43.12% average over a 10-year period. Their sales doubled about every two years. For a time in China, rough diamonds’ sales doubled every 18 months.