Summary of Russian Views of the International Order 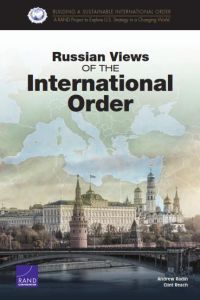 The clash between Russian and Western views on sovereignty and democracy came to a head with two events: Russia’s annexation of Crimea in 2014, and its subsequent support for separatist rebels in Ukraine. In Russia’s view, Ukraine’s movement toward European Union membership imperiled Russian security and regional influence. Russian officials protest NATO’s eastward enlargement and view the alliance as a threat to their nation’s security. Russia participates in certain Western institutions – such as the United Nations, International Monetary Fund and World Trade Organization – but its opposition to the international order has increased since the 1990s. Russia undermines elements of the order as it develops new institutions and agreements as alternatives to Western options. Russian officials and analysts increasingly express the view that the US-led international order endangers Russian interests and security. RAND Corporation researchers Andrew Radin and Clint Reach explore why Russia regards the international order as inimical to its interests. They also outline alternatives for US policy makers, who must weigh the importance of long-held liberal values against the benefits of cooperation with Russia. getAbstract recommends this lucid report.

In Russia’s view, liberal values are mere pretexts for the expansion of American influence through economic sanctions, possible military action, hefty propaganda battles and unconstitutional change of governments. Russian analysts see US attitudes toward liberal ideals as insincere and slanted and as supporting a system that embraces economic colonialism. To Russia, US policies and actions contravene the international order’s rules and norms and pose a threat to stability. Russia believes the US has grown weaker and can’t maintain its dominance.

Though Russia in general sees the existing international order as a threat to its security and interests, it cooperates in areas where...

The Shoals of Ukraine
9
Russia as It Is
8
The Long Hangover
9
Ukraine and the Art of Strategy
7
GIS Dossier: NATO’s strategic dilemmas
6
Forecasting Russia
9