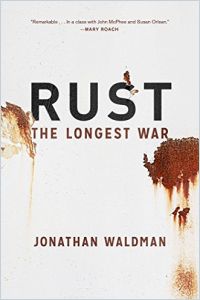 In daily life, rust is terrible and pervasive. Science writer Jonathan Waldman explains that rust is omnipresent, destructive and expensive. Humans have been fighting rust for centuries. Even if they win, sometimes the victories aren’t worth the cost. Waldman’s book is an intimate, personal, poetic and inventive account of what rust is, what it costs, how people fight it, and how other people find it beautiful. Its weakness is the flip side of its strengths: Waldman is so enthusiastic that he adds in so much detail that some readers may flag. The most ardent rustophile may lose the thread of rust in his extended, yet always meaty and worthwhile, biographical sketches. Still, getAbstract recommends Waldman’s highly entertaining, smart saga to anyone interested in industrial civilization, accident prevention, science writing or new perspectives.

Jonathan Waldman has written for The Washington Post, McSweeney’s and Outside. He was a Ted Scripps Fellow in environmental journalism at the University of Colorado.

Rust is the pervasive enemy of just about everything people build. It destroys bridges, nuclear bombs, jets, oil pipelines and washing machines. You name it, rust slows it down, clogs it up, makes it leak or blows it up. Objects rust at different rates, depending on where they’re located. Metal rusts faster in the 21 “salt belt states” of the northeast US – where authorities put salt on roads to fight ice – than they do in Tucson. Things still rust in Tucson. Things rust in outer space.

Engineers and architects enlist an array of technological weapons in the war on rust. Designers build offshore oil rigs with an extra inch of steel on the bottom because the metal corrodes. Your car’s paint and fuel both contain corrosion inhibitors. Rust still attacks them. You pay a higher price to fight rust than you do to fight the rest of the natural disasters to which humans and machines are heir. The war on rust costs the US 3% of GDP.

Even though corrosion affects almost every metal and costs the average American $1,500 a year, rust gets relatively little attention. Humankind’s attitude toward rust reflects its larger attitude about maintenance...