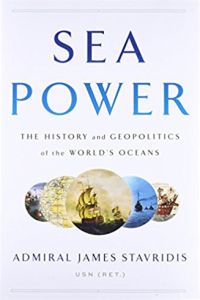 James Stavridis, a US Naval Academy graduate and retired four-star admiral, has more than 35 years of active service in the US Navy. He served as NATO’s Supreme Allied Commander for Global Operations. While in the Navy, he sailed the world’s oceans and seas for decades. Stavridis leverages his remarkable naval background and experience to explain the basics of “sea power” and its strategic military and commercial importance. His comprehensive overview of sea power is accessible and relevant, as well as timely in today’s contentious political environment, which demands constant awareness of what’s happening on every sea and ocean. Stavridis helps you understand how and why a navy becomes an extension of its nation’s will. His comprehensive overview of sea power is relevant and timely.

Admiral Jim Stavridis, USN (Ret.), a graduate of the US Naval Academy, spent decades on active duty. He also served as Supreme Allied Commander for Global Operations at NATO.

All of Earth’s oceans and seas connect, covering 70% of the planet’s surface. The most significant are the Pacific, Atlantic, Indian and Arctic oceans and the Mediterranean, South China and Caribbean seas. The English saying that the sea is one reflects the British navy’s historic domination of the world’s oceans. The island nation relied on “sea power” to control its former empire.

The idea of one immense sea makes sense geopolitically. For the past 2,000 years, dominion on the water has been significant for the world’s great powers. The history of the oceans is the history of the people who sailed the seas – for sustenance, for commerce, for discovery and for conquest.

The Greeks and the Romans sailed constantly. The Ottomans fought on the seas. So did the Hapsburgs. The American Revolution featured fierce naval engagements. The Barbary pirates...