Summary of Secrets of Power Negotiating 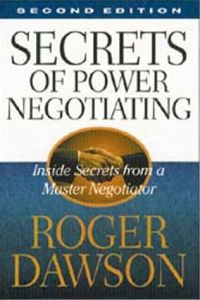 As you read Roger Dawson’s now-classic book, you’ll find yourself nodding your head saying, "Those guys used that gambit against me last week." And then you will say, "Never again!" This book is a rarity: A "Secrets of" book that actually provides you with useful tactics that you can employ in daily life and business. In fact, the knowledge you gain from this book will come in just as handy in everyday situations, like buying a car or setting your kid’s allowance, as it will when your business’ survival is at stake. While the secrets themselves can be reduced to common-sense approaches, many are intuitively brilliant, like the advice to flinch when you hear the other side’s first offer. getAbstract recommends Dawson’s insights to all readers, because everyone can benefit from negotiating a better deal.

Roger Dawson was born in England, immigrated to California in 1962 and became a United States citizen 10 years later. Formerly the president of one of California’s largest real estate companies, he became a full-time author and professional speaker in 1982. His cassette program, Secrets of Power Negotiating, is the largest-selling business cassette program ever published. Several of his books have been main selections of major book clubs.

You have probably heard that the objective of a negotiation is to create a win-win solution. The problem with win-win negotiation is that it just doesn’t happen enough in the real world to make the concept meaningful.

In most negotiations, chances are that the other side is out for the same things as you. "Power Negotiators" understand this reality and use it to their advantage. Power negotiators use every ethical tactic at their disposal to win, but they respect the other side’s feelings. A power negotiator’s objective is to make the other side permanently feel that they have won.

When the negotiation is over, the power negotiator can say confidently that a relationship has been established or improved with the other side. You can only call yourself a power negotiator when this is your objective.