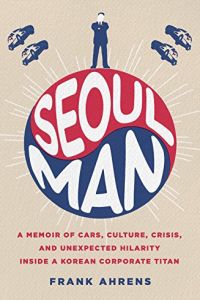 Former Washington Post journalist Frank Ahrens draws parallels between his challenges as a middle-aged newlywed undergoing a career change in an unfamiliar country and the pivotal time he witnessed in the history of Korea and of his new employer, Hyundai Motor Company. His narrative offers a unique perspective and an outsider’s view of South Korean culture. He provides a behind-the-scenes look at the inner workings of Hyundai and the auto industry, as well as many forthright, amusing confessions about his blunders as a new husband and an expat executive. getAbstract recommends this good-humored, atypical business biography to auto enthusiasts and to those curious about working abroad or about Korea.

Frank Ahrens was a Washington Post journalist for 18 years. He served as director of global PR for Hyundai Motor Group from 2010 to 2013.

Halfway Around the World

Newlyweds Frank and Rebekah Ahrens flew to Seoul, South Korea, in October 2010 to begin new jobs. Rebekah took a two-year post with the US Foreign Service and Frank joined Hyundai as director of global PR, having worked since 1992 as a journalist at The Washington Post.

Seoul is an Asian megacity of more than 10 million people. It sets the fads and fashions for much of East Asia, from K-Pop and TV dramas to plastic surgery centers, behemoth corporations and elite universities. The city features throngs of late-night partiers and super-fast Internet for everyone’s LG and Samsung gadgets. Ninety-seven percent of Korea’s citizens are of the same ethnic background, making it one of the most homogenous countries in the world. One of the first things the Ahrens noticed was the aroma of kimchi, the pungent, fermented mix of vegetables and garlic that’s a staple of the Korean diet and an integral part of Korean life. “If there were a global prize for bona fide national dish and staple of cultural identity, kimchi would win it.”

When Ahrens’s boss hosted a welcome dinner for him, Rebekah came along. They didn’t...