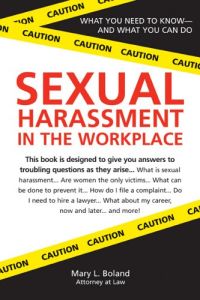 Book Sexual Harassment in the Workplace

What You Need to Know - and What You Can Do

The primary U.S. law regarding sexual conduct in the workplace, which Congress enacted in 1964, has had a profound impact on American society and business. Attorney Mary L. Boland’s comprehensive handbook tells employers and employees how to define and prevent this problem and explains what to do if you are a victim. She provides the right level of detail for nonlawyers, pointing out the kinds of issues, conditions and events that can trigger a complaint. The book is readable and clearly organized, with sections that explain employer responsibilities, legal resources and remedies - from filing a lawsuit to arbitration and mediation. Four appendices and a glossary add valuable information. getAbstract.com highly recommends this lucid, practical book to human resource managers, executives, small business owners and employees at every level, particularly victims of sexual harassment.

Sexual harassment in the workplace is an "immense problem" for thousands of men and women, who annually report incidents to federal and state agencies, as well as to their employers. The laws against sexual harassment, which state that no one should be the target of "unwelcome" sexual conduct or "pressure" in the workplace, apply to both sexes, since both can be either perpetrators or victims.

Women file most sexual harassment complaints. In the 1970s, Redbook magazine found that 90% of the 9,000 women who answered a questionnaire had encountered sexual harassment at work. Another Redbook study found that 81% of women on a California naval base and in a nearby town said they had been harassed. A Cornell University study found that 70% of the respondents reported being sexually harassed. More recently, a 1992 study in Working Woman magazine found that 60% of the 9,000 respondents said they had been sexually harassed.

Harassment has an economic impact, leading to job problems and lawsuits against private corporations and the U.S. government. During a two-year period in the mid-1990s, the federal government spent more than $300 million defending...

Mary L. Boland has authored legislation protecting victims and co-chairs the victim’s committees of both the Criminal Justice Section of the American Bar Association and the Prosecutor’s Bar Association of Illinois. She has served on the Task Force on Gender Bias in the Illinois Courts and on the City of Chicago Advisory Council on Women. A full-time prosecutor, she has taught at Governor’s State University, Roosevelt University and Loyola Law School.