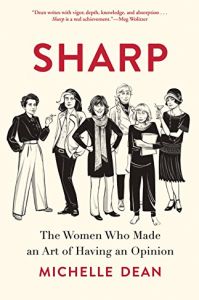 The Women Who Made an Art of Having an Opinion

Journalist Michelle Dean sings the praises of 20th Century literary giants Dorothy Parker, Rebecca West, Hannah Arendt, Mary McCarthy, Susan Sontag, Pauline Kael, Joan Didion, Nora Ephron and Janet Malcolm. They may have been discounted due to sexism or perhaps because some of their male peers fell victim to their sharp minds and words. Dean summarizes these seminal writers’ lives, achievements and flaws as she explores how they wrestled with feminism, ethics and ambition and how they influenced one another and their times.

Dean cites writers who, at a time when society was reluctant to give women’s thoughts and opinions much weight, responded to the disregard and criticism of their male peers and critics with sardonic wit and sharp intellect. Their talent made them exceptions to the social rules of their time. They sparred on equal footing with the men who dominated their contemporary intellectual circles. “The difficulty,” the author explains, “is that people have trouble with women who aren’t ‘nice,’ who do not genuflect, who have the courage to sometimes be wrong in public.”

With their varying backgrounds, education and upbringing, individually and as a group, Dean argues credibly that these women made significant contributions to the 20th century. These writers influenced society’s perceptions about drama, art, politics and philosophy. The author writes that, “they openly defied gendered expectations before any organized feminist movement managed to make gains for women on the whole.”

Award-winning journalist and critic Michelle Dean contributes to The New Yorker, The Nation, The New York Times, Slate and BuzzFeed.

The Many Lives of Michael Bloomberg
9