Summary of Shift Ahead 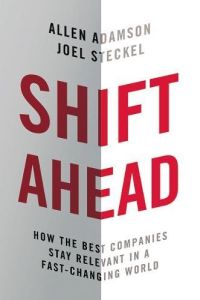 As business becomes even more turbulent, companies must be increasingly adaptive to “shift ahead” with the times. The best firms keep up with the latest changes, anticipate what’s coming and get ahead of it.sAmazon is a good example. The dominant Internet firm is discussing anticipatory shipping – sending products to customers before they place their orders. Firms that can’t be agile and flexible, and can’t shift with the current flow of business, may get left by the side of the road. Marketing consultant Allen Adamson and marketing educator Joel Steckel alert you to seven “red flags” that indicate you could be falling behind, and then they explain what it takes to remain competitive in fast-moving times. Their research includes interviews with upward of 100 senior executives, and they present numerous instructive case histories. getAbstract recommends the authors’ insights to anyone in business who wants an overview of innovation.

Allen Adamson is co-founder and managing partner of Metaforce, a marketing consultancy. Joel Steckel was the founding president of INFORMS Society for Marketing Science and currently serves as vice dean for doctoral education at New York University’s Stern School of Business.

In an environment of constant change, companies must stay adaptable to remain relevant. Many people automatically assume that the most agile firms are sleek, shiny start-ups. Instead, consider Marriott International, one of the world’s best-known hospitality companies with hotels across the globe. Its history provides an exemplary saga of adaptability.

First of all, this competitive, successful international hotel chain began as an A&W root beer stand. J. Willard Marriott and his wife, Alice, founded their soda stand in 1927 in Washington, DC. To seize new opportunities, they later launched the Hot Shoppes Restaurant chain. Later, they started a business to provide food to travelers on flights at the now defunct Hoover Airport in Washington. They sold prepared boxed lunches to hungry passengers.

The Marriotts built their company based on a clear formula for continued success: adaptability. In the late 1950s, the US government constructed the massive Pentagon in Virginia, across the Potomac River from Washington. Recognizing that this landmark would draw thousands of annual visitors, the Marriotts shifted to the hospitality...