Summary of Ship of Fools 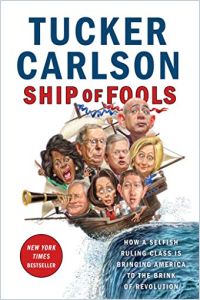 The old lines between the left and right have disappeared from US politics, right-wing commentator Tucker Carlson asserts in this breezily written critique of America’s political establishment. Donald Trump’s victory marked the culmination of this trend, the television anchor argues argues: The disaffected masses saw a chance to jab its collective thumb in the eye of a dysfunctional political system, and they seized the opportunity. Carlson’s analysis is often lucid, as when he details the Democratic machine’s embrace of the deep-pocketed interests it once raged against. Carlson makes a convincing case that liberals now offer free passes to corporate chieftains who run sweatshops, just so long as the CEOs worship at the altar of political correctness. At other times Carlson simply seems shrill, as when he spends pages taking down Chelsea Clinton. Carlson points to Parade magazine’s article about the younger Clinton as an example of liberal media bias, conveniently overlooking the reality that Parade publishes nothing but puff pieces. While clearly right-leaning in its bent, ultimately, this engaging book offers an important message to leadership on both sides of the aisle: stop turning your backs on the real needs of the American electorate.

Tucker Carlson is the anchor of Tucker Carlson Tonight on Fox News Channel. He has been a staff writer at the Arkansas Democrat-Gazette and The Weekly Standard.

A Thumb in the Eye of the Ruling Class

Donald Trump’s unexpected victory in 2016 reflected the American electorate’s deep dissatisfaction with the political establishment. Most Americans looked at Trump and saw a candidate who was crass and not especially well-schooled in politics. But they also saw someone who reveled in bashing the status quo that many voters had grown to despise. Trump wasn’t in charge when the United States invaded Iraq or bailed out Wall Street, and he wasn’t a part of the elite that presided over the collapse of American factories or the rise of the opioid epidemic. Trump’s victory wasn’t so much a win for Trump, therefore, as it was a dramatic repudiation of business as usual in American politics. In casting their ballots for Trump, voters registered their discontent with the ruling class.

Trump’s detractors refuse to accept this basic reality. Instead, they look for alternative theories that would explain Trump’s victory. Perhaps mendacious news reports duped voters. Maybe it was Russian meddling in the election that tipped the scales. It’s possible the small-town rubes were dazzled by Trump’s riches. Perhaps Trump’s unconcealed racism...