Summary of Shopping for Water 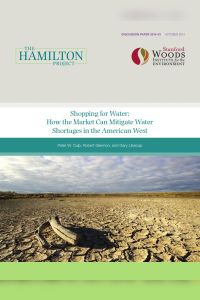 Around the world, droughts and shrinking groundwater resources presage a potentially dire situation, particularly in dry areas such as the American West. Previous water shortage solutions, which focused on carving out new reservoirs or building new dams, are no longer economically and politically viable. Today’s cures require flexible approaches, such as water trading and water exchanges, as well as greater state and federal regulation and monitoring. In this comprehensive and scholarly report for the Hamilton Project, attorney Peter W. Culp and professors Robert Glennon and Gary Libecap provide some hope by presenting useful examples of successful solutions and by offering proposals on how to allocate, market and monitor water. getAbstract recommends their findings to environmentalists, policy makers, farmers and anyone concerned about the future of water availability.

Since 2000, western US states have grappled with a severe and worsening water shortage that threatens environmental, agricultural, municipal and industrial interests. In California, for example, rivers haven’t met farms’ and cities’ water demands since 2006. The Sierra Nevada snowpack melt delivered just 25% of its normal water supplies in the 2013-2014 season, forcing farmers to leave more than 500,000 acres fallow.

The situation is most severe in the seven Colorado River basin states: Arizona, Colorado, California, New Mexico, Utah, Nevada and Wyoming. The basin’s waters support more than 40 million people, millions of acres of agricultural land and more than one-quarter of US GDP. These waters nourish critical food sources. For example, California produces about half of the country’s fruits, vegetables and nuts.

A survey conducted by Deloitte Consulting revealed that 70% of the world’s 184 largest companies view water access as a critical business risk. Technology giants, for instance, rely on water-soaking air conditioning units to cool thousands of servers. Some of these “server farms” consume as much energy as a medium-sized city.