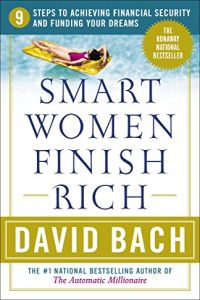 Women have disadvantages when it comes to handling money, says author David Bach. Having been brought up to believe that finances are a man's responsibility, some women don't even know their family's income. Although his book is addressed to "smart women," Bach's goalsetting and investing guide is helpful to men, also. He does love his bullet points and numbered lists: in addition to the "nine steps" of the subtitle, there are "three myths," "ten biggest mistakes" and more. But, the lists help make his recommendations memorable and easy to use. Bach implies that he is revealing revolutionary techniques, but actually his advice is basic wisdom that emphasizes values and adopting sensible practices. getAbstract recommends this book to you if you find it easier to talk about sex, religion and politics than about money or if you're only making minimum monthly payments on your credit card - so try not to get turned off by Bach's ever-wise grandmother (is she for real?) or his constant promotion of his books, trademarked seminars and other services.

David Bach publishes and speaks widely about financial planning and has developed "Smart Women Finish Rich" and "Smart Couples Finish Rich" seminars and a Web site. Previously, he was senior vice president of a New York brokerage firm and a partner in The Bach Group investment firm.

It All Started with Grandma

Rose Bach was the chief wig buyer at Gimbel's department store in New York City. Although she and her husband were poor, she decided that investing was the key to success. Without any advice, she bought as many stocks and bonds as she could and encouraged her grandson to do the same. At age seven, he made his first stock purchase after saving his allowance for months: three shares of McDonald's. Inspired by his grandma's example, author David Bach went on to advise countless other women about financial security. Many women do not know the details of their financial situations, even though it is increasingly common for a woman to become her family's financial mainstay. In the U.S., women sign "seven out of ten personal checks," are responsible for "upwards of 52% of all earned household income," and own more than nine million small businesses - a majority.

Step One: "The Financial Facts of Life"

Because women live longer, earn 25% less, have a harder time finding a job and collect a pension only about 20% of the time, they should plan carefully. Yet they are often stymied by their lack of education about basic financial realities...

This Is the Year I Put My Financial Life in Order
9
The Index Card
9
55, Underemployed, and Faking Normal
9
Game Changers
9
Squeezed
8
The Way to Wealth
9