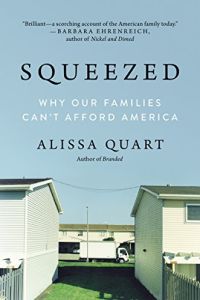 Middle-class life used to mean families worked reasonable hours, owned modest homes, afforded vacations and set money aside for retirement. But since 1990, income has stagnated for most Americans. Why can’t people make ends meet? Journalist Alissa Quart says it’s not for lack of effort. She details how growing income inequality squeezes out the middle class. Her broad introduction to the plight of real people dealing with the human costs of “progress” – and to the larger economic forces driving middle-income families’ downward mobility – will appeal to those wondering why their carefully laid plans aren’t exactly working out.

Pregnant on the Job

New York City lawyer Daniela Nanau was on a fast track to success until she became pregnant. When she told her employer, he seemed to grow hostile. Luckily, she found another job. She represents many pregnant women who ask for accommodations on the job, such as a stool to sit on while working a cash register.

Employers don’t like to hire mothers. Experts estimate women’s salaries decrease 7% for each child. Proving the fact that women are discriminated against is difficult. Companies cover their actions with a paper trail that disparages women who complain. As a result, women hide their pregnancies as long as possible, fearing for their jobs. The Pregnancy Discrimination Act (PDA) offers some protection, but it’s been diluted over time. If all US companies offered generous paid leave, that would help people pick up the slack when they had to be out – and companies would realize that they won’t go under when employees take leave.

Brianne Bolin, an adjunct professor at Columbia College in Chicago, earns less than $24,000 a year. She...