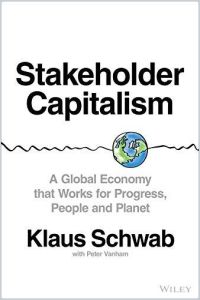 The planet faces existential threats, World Economic Forum leader Klaus Schwab, writing with Peter Vanham, argues in this sobering analysis: Earth is getting hotter, the rich are growing richer and politics are becoming more polarized. Yet Schwab and Vanham also believe that humanity can conquer its current crises if business leaders and politicians shift their mind-sets to more long-term thinking. The authors offer a number of intriguing prescriptions, but their arguments in favor of more unionization and diversity might fail to sway some traditionalists.

The global economy is caught in a paradox.

Economies have never been as developed and as thriving as they are today. Once unthinkable luxuries and conveniences are now commonplace. At the same time, inequality has deepened.

In the early 1970s, global economic growth soared to 6%; in later years, it averaged more than 4%. Since 2010, growth has been more muted, but governments and consumers have increased their debt. During crises such as the COVID-19 pandemic, governments pass large stimulus packages that further raise debt levels. Combine high borrowing with little inflation – particularly in Europe and Japan – and debt burdens grow heavy.

Simon Kuznets was a Russian-born economist who emigrated to the United States and helped create the concept of gross domestic product. However, he noted that GDP was a limited metric in terms of its capacity to set economic policy, as GDP measures consumption but not a society’s overall well-being. Kuznets also posited that income inequality declined during economic booms. For...