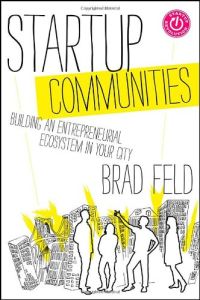 The United States and much of the developed world remain in economic doldrums, and governments are unwilling or unable to spend their way out. The US needs economic stimulus and is counting on entrepreneurs. New ventures and small businesses account for a significant percentage of jobs and economic growth. Based on his decades as an entrepreneur and on the leadership role he played in developing a “startup community” in Boulder, Colorado, Brad Feld offers a short, practical guide to bringing this economic engine to other communities at a grassroots level. While his advice feels somewhat rigid at times, and he bases his treatise largely on his experience in one city, getAbstract recommends this handbook to entrepreneurs seeking to help their communities thrive, and to policy makers, economic development professionals, university administrators and anyone interested in the economic future of their community.

Brad Feld, a frequent speaker and a blogger, is a successful entrepreneur, investor and mentor to dozens of startups nationwide.

The economic collapse of 2008 remains a powerful force worldwide. Past debts and current deficits restrict cash-strapped governments in the US, Europe and beyond. The US Congress and the White House are encouraging initiatives that enable cities and regions to ignite the economy through accelerated entrepreneurial activity. Some districts have become startup communities, as existing entrepreneurial magnets deepen and broaden their commercial base. Areas that lack such engines decline and struggle because talent and capital go elsewhere.

Rigid corporate and societal structures are giving way to open networked structures. Startup communities appear when risk takers form and lead loose networks that turn a town into an active, prosperous coalition that can compete with the world.

Boulder, Colorado, provides the mix of ingredients needed to develop and maintain an entrepreneurial culture. Partly by chance – and partially due to favorable geography and weather – Boulder has become one of America’s most dynamic small cities for new ventures. Boulder boasts a high concentration of entrepreneurs per capita. For the past...