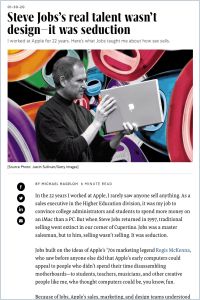 Michael Hageloh spent 22 years at Apple. But he contends that he didn’t spend any of it selling. Hageloh shows the ways Apple built “magic” into its image and products through marketing that always seduced but never sold. He credits Steve Jobs as the “conductor” of the process of making consumers fall deeply in love with Apple products and in the Apple community. Though he makes a few extravagant claims – such as that Apple changed the world in ways Facebook and Google haven’t – Hageloh provides valuable marketing strategies for any company seeking to strengthen its connection to its customers.

Author Michael Hageloh, who worked at Apple for 22 years, recounts what happened when Steve Jobs came back to Apple in 1997. After his return, no one at Apple engaged in “traditional selling.” Jobs used concepts pioneered by marketing savant Regis McKenna, who understood that even people who weren’t vested in technology – mostly those with creative talent – would buy Apple computers.

Jobs led Apple to develop a profound understanding of its consumers’ mind-set. He understood that people resent having someone sell to them. Instead, Apple prioritized “design and functionality.” Thus, when Hageloh sold to universities, he focused on relationships and needs, not sales numbers.

Function was more important than design.

Following Jobs’s edicts and philosophy, Apple salespeople seldom pushed the performance characteristics of its technology. Instead, they emphasized its products as tools for “transformation and transportation” – vehicles that enabled customers to journey farther and to alter their universe.

Everything’s Becoming a Subscription, and the Pandemic Is Partly to Blame
8