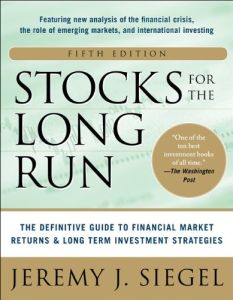 Book Stocks for the Long Run

Wharton professor Jeremy J. Siegel’s classic text belongs in the hands of any diligent investor. From a practical perspective, his book covers every serious event and variable that could affect a diversified portfolio over the course of many decades. As the market proves daily, investing is complex because all types of news and events – as well as human behaviors – influence investment returns. In more than 400 information-packed pages, Siegel’s revised fifth edition of his classic text helps you better understand this complicated socioeconomic system and shows how that knowledge can improve your finances. While never giving investment advice, getAbstract recommends this best-selling guide to both new and seasoned investors.

The Long and Short of Financial Market Performance

In the past 200 years, the US economy changed dramatically as the nation evolved from an agrarian to an industrial society, and then became a global economic and political power. Since 1926, the US has experienced the Great Depression, post-World War II growth, the tech boom, and the 2008 financial crisis and recession.

Across two centuries of major transitions from 1802 to 2012, stocks averaged a 6.6% annual real return, while long-term government bonds averaged 3.6%; short-term bonds, 2.7%; and gold, 0.7%. Gold barely kept up with inflation during this 210-year period, while stocks, on average, doubled their “purchasing power” every 10 years. Notably, in the first 150 years of this period, the general price level was more or less stable. Then the US and other developed nations changed the global monetary standard from gold to paper, leading to inflation that affected asset returns.

Bond prices, which guarantee a fixed payment over time, vary as short- and long-term interest rates change. Bonds peaked in the 1970s as interest rates soared to more than 14%, accompanied by a rapid rise in inflation. The 1970s ...

Jeremy J. Siegel is a finance professor at the University of Pennsylvania’s Wharton School and a senior adviser at WisdomTree Investments.