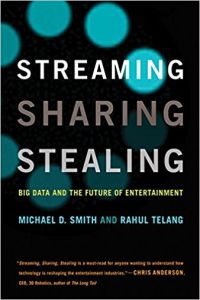 Carnegie Mellon professors Michael D. Smith and Rahul Telang believe the locus of power in the entertainment industry has shifted from large, established content creators like Warner Brothers to online entertainment distributors like Netflix and Amazon. For a century, the traditional “majors” – movie studios, television networks, publishers and record labels – sustained their dominance by relying on their industry’s high barriers to entry and leveraging economies of scale. The rise of digital media and networks in the 21st century made data the portal to power. Online distributors can collect data on every individual subscriber. With this information, they can provide personalized recommendations to subscribers and promote original content directly to fans. Smith and Telang show how the majors could compete in this new environment by adopting and adapting to the data-driven approach. getAbstract recommends this cogent, sober analysis to entertainment executives, content producers and distributors contending with current realities or preparing for the next disruption.

“A Perfect Storm” of Disruption

Throughout the 20th century, a handful of large, established movie studios, television networks, publishers and record companies – “the majors” – sustained control of their industries by relying on high barriers to entry and by leveraging substantial economies of scale.

The 21st-century revolution in digital technologies and online networks has lowered the barriers to entry for creators and shifted power from the majors to new online content distributors like Amazon, iTunes and Netflix. To compete with these upstarts, the majors need to adopt and adapt to some of the modern distributors’ practices, particularly data-driven decision making.

The Way It Was

In the 20th century, major entertainment firms developed a business model in which only the biggest companies could compete. In the recording industry, for instance, the first major record companies – the Columbia Phonograph Company and the Victor Talking Machine Company – scouted new recording artists, produced their albums, manufactured the disks, and controlled distribution and promotion. In 1920, they sold nearly 150 million records...