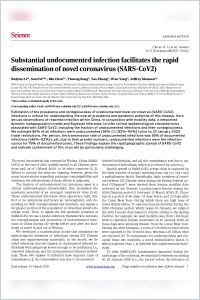 People who show no symptoms of novel coronavirus (SARS-CoV-2) must still adhere to local control measures, to ensure the protection of vulnerable human populations. As researchers found, the virus freely circulated for weeks in Wuhan City, China, spread by people who were largely asymptomatic. In fact, an astounding 79% of initial infections occurred due to exposure to undocumented viral carriers. This in some part accounts for the rapid global spread of SARS-CoV-2, and makes its containment extremely challenging.

People who do not know they are carriers of novel coronavirus (SARS-CoV-2) can heavily contribute to its rapid spread.

The novel coronavirus that inundated Wuhan, China in late 2019 rapidly spread to 58 additional countries. Understanding the contagiousness of this virus is critical to controlling the disease it causes.

Scientists studied original observations of the pandemic in China, plus mobility data, a metapopulation model, and Bayesian inference, to find out how undocumented infections contributed to its aggressive dissemination.

Efforts to contain the virus are ongoing; however, given the many uncertainties regarding pathogen transmissibility and virulence, the effectiveness of these efforts is unknown.

Their data indicated that about 86% of all infections before China’s January 23 travel restrictions were initiated were undocumented. They also found that an astounding 79% of initial infections occurred due to exposure to undocumented, asymptomatic carriers. This explains the rapid viral spread in human populations, and makes controlling infections exceedingly difficult.

People with undocumented infections often have mild or no discernable symptoms, but they can transmit the virus to large numbers of people.

The researchers used a “model-inference framework” to estimate how many undocumented infections occurred in China during the weeks before and after the country’s Wuhan travel ban. Their mathematical model simulated infection dynamics among 375 cities, dividing infections into documented or undocumented cases. They tracked individual travel patterns from city to city from February 1 to March 12, typically a time of heavy travel due to the Chinese New Year. They tested this model versus models that used “synthetic outbreaks generated by the model in free simulation.” The researchers then applied a similar framework to outbreak data collected before the January 23 travel restrictions.

The findings aligned with estimates of the median latent and infectious periods of approximately three to four days. The team found that between January 10 and January 23, only 14% of viral infections were reported, revealing an 86% rate of undocumented infections. A total of more than 13,000 new COVID-19 infections had occurred during that time frame in Wuhan City. Researchers found that without undocumented transmission, infections would have been reduced by almost 80%. This finding indicates that contagious but undocumented infections strongly facilitated the geographic spread of SARS-CoV-2 within China.

After the virus was recognized in China, control measures such as rigorous testing, travel restrictions, protective gear, social distancing, and self-quarantines began.

The researchers team re-estimated the parameters between January 24 and February 8, taking mobility restrictions into consideration. Transmission rates dropped to less than half of previous rates. The team deduced that the undocumented infections’ contagiousness was most likely reduced because after that date only milder forms of the disease were not documented, and because people were engaging in better protective behavior and hygiene. Researchers caution that these results may not be perfect, because Chinese control measures were always in a state of flux. Still, a reporting delay of six to nine days before the infection was confirmed proved that viral shedding is typical among people who have the virus, but are not yet showing symptoms.

Our findings also indicate that a radical increase in the identification and isolation of currently undocumented infections would be needed to fully control SARS-CoV-2.

Media coverage and general awareness of SARS-CoV-2 may help identify infections that would previously not be reported. Other measures which have helped curtail undocumented virus spread include travel restrictions, school closures, self-quarantine, and use of protective gear such as face masks. Response to SARS-CoV-2 continues to evolve, challenging health professionals who are still trying to understand its epidemiological characteristics. The researchers are not completely confident about their advice for controlling it because of reporting inaccuracies, and they cannot say whether a rebound outbreak will likely occur.

The study of China’s SARS-CoV-2 crisis shows how a highly communicable virus can rage through society, even when most people are asymptomatic.

The revelation that 86% of contagious infections went undocumented for a time in China, yet still caused significant disease, should inform practices and responses to future pandemics. Today, four coronavirus strains circulate in humans around the globe. The H1N1 pandemic of 2009 was a serious, fast-spreading flu virus that became endemic. If the novel coronavirus follows this pattern, it will become humanity’s fifth current endemic coronavirus.

Coronavirus Outbreak: How Scared Should You Be?
9