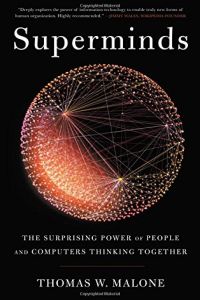 Can people harness the power of collective intelligence to solve the world’s most intractable problems? What does the “global mind” look like? Will AI take away jobs? Thomas W. Malone, founder of the MIT Center for Collective Intelligence, provides a fascinating portrait of a future in which the collaboration of human and artificial intelligence will transform society’s “hierarchies, democracies, markets, communities and ecosystems.” Offering scope and insight in engaging, accessible language, Malone imagines a global mind encompassing all other “superminds” and articulates humanity’s deepest connections.

Thomas W. Malone is the Patrick J. McGovern Professor of Management at the MIT Sloan School of Management and founding director of the MIT Center for Collective Intelligence. He also wrote The Future of Work.

Thomas W. Malone, founder of the MIT Center for Collective Intelligence, asserts that artificial intelligence won’t look like robots from science fiction. He suggests that it will take the form of a tool or an assistant. As tools, machines won’t increase individual intelligence. But, Malone believes, they will augment collective intelligence by facilitating faster and better human communication.

As assistants, machines can collate large amounts of data and make suggestions. They can act as managers by directing traffic, for example, or by delegating calls in a call center. The machines won’t look like people; instead, Malone describes how the tasks they perform will drive their design. The exceptions would be robots performing human-like tasks, such as serving a meal, making a bed or engaging in sex.