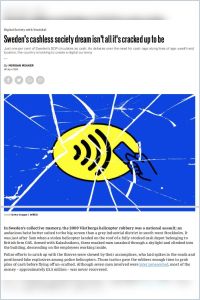 Sweden’s broad adoption of digital payments has its pluses and pitfalls, according to this insightful article by journalist Morgan Meaker. Though safer and often more cost effective, digital payments may not be ideal for all segments of society, Meaker finds, citing the challenges they present for low-income earners, the elderly and those in rural locales. Her reporting shows that policy makers need to consider the bigger picture when assessing the benefits and disadvantages of financial digitalization.

The first decade of the 21st century saw a series of robberies of banks, merchants and buses in Sweden. The most famous was the 2009 Västberga helicopter robbery, in which thieves made off with £5.5 million [$6.75 million] from the roof of a cash depot building. Anti-cash sentiment captured the public imagination, and unions pushed for digital payments to protect their workers from theft.

Sweden’s economy operates with very little cash – only 1% of its GDP, as of early 2018. For many retail business owners, accepting digital payments is more secure and convenient. Counting ...

Is Cash Still King?
8
Everything You Need To Know About What Amazon Is Doing In Financial Services
8
Blockchain Babel
8
The Financial Services Guide to Fintech
8
Digital Cash
8
Perpetual Debt in the Silicon Savannah
7