Summary of Tales From the Boom-Boom Room 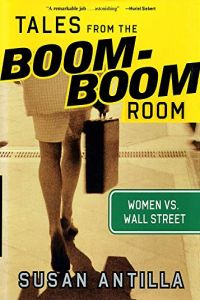 Susan Antilla presents a powerful and startling indictment of the sexist behavior of stock brokers working for Wall Street and its offshoots, specifically Smith Barney’s Shearson/American Express office in Garden City, Long Island. Women struggled to be hired, and then found that the men in charge of their careers practiced all sorts of sexual harassment and intimidation, from jokes to displays of sexual prowess, physical contact and threats of rape. As she describes, the bosses sought to bar women or trap them in low positions. While painting the broader picture, Antilla focuses on whistle blower, Pam Martens, who revealed the situation when she sued for damages. This skillfully written book reads like a fascinating novel, so graphic and dramatic that it is more like a screenplay than a report. getAbstract.com believes it will draw intense interest from everyone affected by this issue: female executives who face glass ceilings and harassment, male executives who must determine their own philosophies toward their female colleagues and human resource professionals who are charged with watching out for them both.

Bloomberg News columnist Susan Antilla once worked at the New York Times, where she launched a weekly investing column and an ombudsman column called "Between Main & Wall." She was the bureau chief of the Money section of USA Today and financial bureau chief for the Baltimore Sun. She was twice a finalist for a Gerald Loeb Award for Distinguished Business and Financial Journalism.

Most women face a very hostile work environment when they sue for sexual harassment, and that’s what happened to Pam Martens when she litigated against Smith Barney in the 1990s. Women in the securities industry were initially afraid to talk about sexual harassment, but when they did, their stories of discrimination were strikingly similar.

These women were scared to come forward for good reason: public attention provoked retaliation from their companies, ranging from subtle social and business exclusions to withdrawal of privileges. A woman who claimed emotional distress - in a climate charged by lawsuits - risked having her psychological, marital and gynecological records subpoenaed and presented to an arbitration panel. The pressure caused emotional problems for many women. Yet, those who pressed their harassment suits found that the most outrageous cases of sexual discrimination were usually settled for fairly high amounts. However, the plaintiffs had to promise to keep quiet about what happened and what amount they were paid.

As this case against Smith Barney proceeded, neither the firm nor many of the plaintiffs would discuss it. However, once...