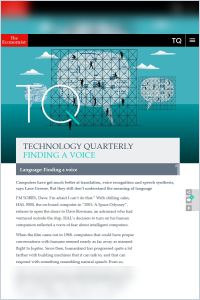 From Terminator and I, Robot to Ex Machina and Blade Runner, many films have imagined the existence of human-like, intelligent machines. While artificial intelligence has been making huge progress, one area stubbornly remains the domain of humans: the ability to understand the meaning of language. Lane Greene, deputy editor for books and arts for The Economist and author of You Are What You Speak, looks at language technology research and its many obstacles and challenges. getAbstract recommends this article to anyone fascinated by the future of language technologies.

Lane Greene is The Economist’s deputy editor of books and arts, and author of You Are What You Speak, a book about the politics of language around the world.

Real progress in language technologies began with the availability of powerful processors and large amounts of data.

Research into automatic language processing started over 60 years ago, but has only really taken off over the last few years. Language is often messy, so traditional rules-based approaches, like writing rules that help the machine break down sentences, were limited. Instead, researchers adopted a “brute force” approach, scouring large amounts of human language data – such as translations, recordings and transcriptions – and then analyzing language patterns. Digital neural networks (mathematical models that mimic the way the brain learns) helped the machines establish these patterns. This “deep learning” technology needed powerful hardware to process the data, so researchers started using graphical processing units (GPUs) found in video games.

To recognize speech and match sounds to words, machines need “training” data from recordings and transcriptions.

Language is made up from phonemes...