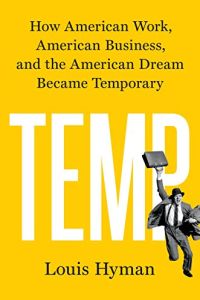 Job security remains a pressing problem in American life. Cornell labor professor Louis Hyman says the 1970 recession marked the start of workforce commodification. Lucid and critical, he shares his inside understanding of consulting and temp work, though he may underplay gigs’ opportunities, particularly for young people seeking experience. He says firms must invest in their workforce, R&D and innovation or lose out to worker-owned and -operated services in the digital universe. Readers interested in US labor history, the digital future, the gig economy, corporate culture and the quest for a permanent job will find a lot to think about here.

Former Fulbright scholar and McKinsey consultant Louis Hyman is an associate professor at the School of Industrial and Labor Relations at Cornell University. He is the author of Debtor Nation: The History of America in Red Ink and Borrow: The American Way of Debt.

From the 1930s to the 1960s, America had a planned economy. Industrial corporations were stable employers.

After the stock market crash of 1929, the old industrial economy disintegrated. Fresh regulations and laws, complete with new job descriptions, emerged from the wreckage. Management consultants, unionists, accountants and migrant labor helped create the 20th-century corporation that built postwar America. In the 1920s, industrial giants like US Steel and General Motors devised the blueprint for the modern corporation: vertically integrating supply chains for seamless production and hiring accountants to manage the financial complexity of multiple divisions.

The Great Depression challenged the supply-and-demand economy and reduced trust in the market. With the New Deal, new government-protected unions guaranteed a “comfortable life” for workers in exchange for reliability. Industrialists had invested millions in expensive production lines, so disruption could ruin them. Unskilled workers had little individual value, but those who could organize found they gained unprecedented power as part of a group.

The Gig Is Up
8
Career Fear
8
Flat, Fluid, and Fast
8
The Talent Revolution
8
The Deals That Made the World
8
The Future of Work
9