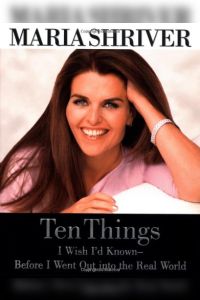 When Holy Cross College invited NBC News correspondent Maria Shriver to give the 1998 commencement address, she almost refused. Although she is a niece of President John F. Kennedy, she was almost terminally afraid of giving speeches. But to our benefit, she changed her mind. This charming little book is her response to the flood of requests she received after her speech aired on C-SPAN. In an expanded version, she explores each of her "ten things" through commentary and illustrative experiences from nearly twenty-five years as a network news journalist. She also draws on her personal life as a daughter, friend, wife, and mother. Intimate, clever, funny, and wise, this life lessons book is also an insider look at the media. getAbstract recommends this smartly written book for anyone interested in a quick but satisfying read, especially media and (or) celebrity junkies.

Maria Shriver is a Peabody and Emmy Award-winning journalist and NBC correspondent. She also is the best-selling author of What’s Heaven? The daughter of R. Sargent and Eunice Kennedy Shriver, she lives with her husband, actor Arnold Schwarzenegger, and their four children in Santa Monica, California.

When R. Sargent Shriver was the Democratic nominee for vice president in 1972, his daughter Maria helped out on the campaign. The Shriver staff put her in the campaign plane with the media. "It turned out to be the best thing that ever happened to me," she says now.

Although she’d been surrounded by politics her entire life, that year showed her "something groundshaking: I saw how the newspeople put their fingerprints on history before it became history, taking something that had just happened in front of my eyes and giving it context." She was hooked, and knew she wanted to be a journalist. "Television would be the politics of the future...(it would) touch people, move and excite them, anger and educate them the way politicians used to when they had direct contact with voters one-on-one in the streets."