Summary of That Will Never Work 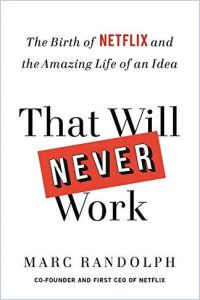 In 1997, Reed Hastings and Marc Randolph batted around start-up ideas on their commute to Silicon Valley. Randolph kept pitching, despite constantly hearing objections like “that will never work.” He thought up a lot of duds, but then he hit on DVDs by mail. Despite naysayers – DVDs were new – Netflix launched in 1998. Randolph, its first CEO, tells the entertaining story of its success, from ideas they sketched on diner napkins to an $80 million dollar IPO in 2002. He includes bumps along the way, writing with the “radical honesty” that is the mainstay of Netflix’s culture. You’ll learn a lot – although Randolph left Netflix in 2003, so Hastings will have to write the sequel. Meanwhile, Randolph’s corporate and personal saga proves fascinating.

Getting to a good idea takes hard work and systematic vetting.

As Marc Randolph and Reed Hastings carpooled to work in 1997, Randolph pitched start-up ideas. Most were bad. Hastings’s company, which had recently acquired Randolph’s company, was merging with another firm. In four months they’d both be out of work, but with money to invest in a new venture.

They knew their future was in internet sales, but that’s all they knew. Hastings had gone back to school to study education. He wanted to change the world. Randolph was passionate about starting a new company. He had talked two valued employees into moving to the West Coast with him, and wanted to keep his core team together. He depended on Christina Kish for project management and Te Smith for PR and press. They helped him vet ideas to pitch to Hastings.

Hastings wanted something that encouraged repeat business, because the effort they needed to exert to sell one item was the same as the effort to sell dozens. Both admired Jeff Bezos’s success in selling books on Amazon. Randolph thought, what about videotapes? But tapes were expensive then. Plus, most people wanted the latest releases, and shipping...