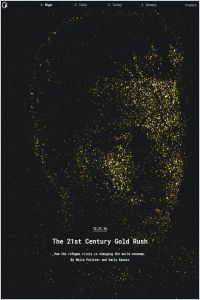 A little-publicized aspect of the refugee crisis is that migrants have become a lucrative source of revenue in transit countries. Veteran investigative reporters Malia Politzer and Emily Kassie put their own safety at risk to document how criminal networks in Africa, the Middle East and Europe profit off migrants by engaging in human trafficking, extortion, forced prostitution and child exploitation. Writing in the Huffington Post’s online magazine Highline, they explain how the migrant business in some instances perpetuates the misery that created the refugee crisis in the first place. getAbstract recommends this first-rate investigative reporting along with its masterful multimedia presentation to policy makers and anyone interested in understanding detailed aspects of the refugee crisis.

Award-winning investigative journalist Malia Politzer has written about about Europe’s economic recession, the refugee crisis and immigration. Emily Kassie is a multimedia journalist and documentary filmmaker focused on social injustice and violent conflicts.

In what amounts to the “biggest refugee crisis in recorded history,” refugees across Africa and the Middle East are fleeing poverty and war in the hope of finding a better life in Europe. Along their arduous journey, unscrupulous people have found ways to turn these migrants’ plight into profit.

Agadez, Niger, has become a central transit point for smugglers in weapons, drugs and humans. Most migrants from sub-Saharan Africa escaping poverty and violence in their home countries pass through this small town in Niger on their way to Libya, from where they hope to depart for Europe. When Libya plunged into lawlessness after the collapse of its government, the Niger-Libya border became porous and its border agents bribable. In 2013, migrant smuggling networks made between $8 million and $20 million in Libya; by 2015, that number had risen to an estimated $323 million.

Migrants arriving in Agadez stay in so-called ghettos – open-air courtyards tucked away behind adobe brick walls that house up to 100 migrants at a time. There, they wait for their relatives...

Ten Commandments to Overcome the EU’s Many Crises
7