Summary of The 80/20 Individual 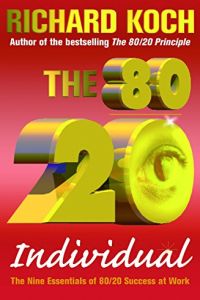 Author Richard Koch contends that individual initiative is responsible for most progress, given that 20% of entrepreneurs or innovators are responsible for 80% of results and new ideas. Koch focuses on how to be a successful entrepreneur by working with a small team of supporters. He discusses the importance of good ideas, great colleagues, a powerful value proposition, good partners and, of course, ample capital. He suggests a trend toward a new breed of corporations based on individualism, though Bill Gates and Warren Buffett alone do not necessarily make a trend. While Koch writes in a breezy, engaging style, the 80/20 mantra becomes generalized and repetitious. It’s a popular expression, but does it always apply? The other chapters are more solid, though they restate known entrepreneurial principles and techniques, dressed in 80/20 lingo. As such, getAbstract.com suggests, they may be a good introduction for the new entrepreneur, if not for the rugged individual who has already mastered the percentages.

Richard Kock is the author of The 80/20 Principle and The Power Laws of Business. An entrepreneur, his ventures have included consulting (LEK), developing and marketing personal organizers (Filofax), hotels (Zoffany), restaurants (Belgo) and premium gin (Plymouth). He was a consultant with The Boston Consulting Group and a partner of Bain & Company. He is currently an investor-director of Betfair and advises private equity groups in the U.K. and South Africa.

The individual revolution has arrived. Creative individuals are replacing capitalists as the creators of wealth. The underlying principle of this revolution is the 80/20 principle based on a common finding in business, science, education and other fields that 20% of the people produce 80% of the results.

The power of this principle lies in the individual, since individuals, rather than central planners and hierarchical structures, are the engines building more new enterprises. This revolution - as influential and world-shaking as previous revolutions in agriculture, industry and management - is gathering steam and will remake society over the next two decades. Examples of this shift are today’s most successful corporate leaders, Bill Gates and Warren Buffett. Although most of the U.S. economy is still governed by managerial capitalism, more and more individuals are gaining power and wealth; more entrepreneurs, rather than institutions and passive investors, are stepping into power positions.

The 80/20 principle dates to 1897 when Italian economist Vilfredo Pareto found a skewed distribution in wealth in every country and time ...