Summary of The Age of Magic Money 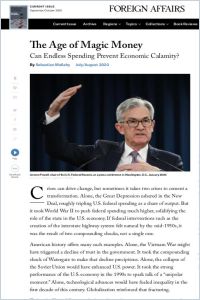 In just a dozen years, the world economy experienced two massive disruptions: the 2008 financial crisis and the 2020 COVID-19 pandemic. The response in the United States and other advanced economies has been an explosion of monetary and fiscal stimulus that presages an era of “magic money.” Journalist Sebastian Mallaby describes the possible economic and political upshots of broader state interventions in this intelligent examination of what is likely to be a new macroeconomic normal.

Sebastian Mallaby is a journalist and a senior fellow at the Council on Foreign Relations.

US government spending will take the nation’s debt-to-GDP ratio past its historical high-water mark.

To mitigate the calamity of the 2008 financial crisis, the United States expanded its public debt to more than 60% of GDP, roughly twice its 2001 level. And the 2020 fiscal response to COVID-19 will push debt to the previous peak of 106% of GDP, last reached in financing World War II.

The Federal Reserve is taking extraordinary monetary policy measures, including adding $5 trillion in Treasury purchases through 2021. And the United States is not alone: China, Japan, the United Kingdom and the euro zone are running...

The Man Who Knew
9

The Cult of the Expert – and How It Collapsed
9

The American Economy
7
Between Debt and the Devil
9
Could Negative Interest Rates in the US Ever Happen?
8
Fiscal Therapy
8
The Great Demographic Reversal
8
Optimal Money Flow
9