Summary of The Alter Ego Effect

HarperBusiness, 2019
THE ALTER EGO EFFECT: The Power of Secret Identities to Transform Your Life. Copyright © 2019 by Todd Herman. Published by arrangement with Harper Business, an imprint of HarperCollins Publishers
ISBN: 9780062838636
Pages: 272 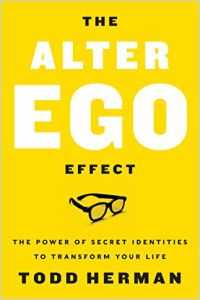 Are you distracted from your goals by negative thoughts or lack of confidence? Do you sabotage yourself at crucial moments at work or at home? Do you wish someone else could take over and do the heavy lifting? Just cultivate an “Alter Ego,” says business coach Todd Herman, who has helped dozens of high achievers develop other selves that “step in” when the going gets tough. Remember when you played superhero as a kid and felt invincible? Herman tells you how to harness that power again. If you seek inspiration and guidance, examine what’s holding you back, decide what matters most and focus on building the Hero Self who can take on some of life’s toughest challenges.

Todd Herman is a toughness and performance coach who works with professional and Olympic athletes. He created the 90-Day Year, a business achievement program that helps business owners master execution.

An Alter Ego can make you more resilient and unlock your Hero Self.

As a young football player, Bo Jackson had a lot of anger issues, and that hurt his game. He created an Alter Ego, “Jason,” based on the main character in the Friday the 13th movie franchise. He appreciated Jason’s lack of emotion and relentlessness. By bringing Jason, his Alter Ego, onto the field, Jackson could leave his anger on the sidelines. He understood that people play many roles in life: The Alter Ego can activate the Hero Self, who is free of doubt and fear and who can engage meaningfully with work. The Alter Ego helps build resiliency and allows your creative self to flourish, while protecting your fragile self from criticism.

People mistakenly believe that Superman is Clark Kent’s Alter Ego, but actually, it’s the other way around. Superman is the Core Self, and Clark Kent is the Alter Ego that allows him to exist in society.

The Roman philosopher Cicero mentions alter egos in the first century BC. The term translates as “the other I,” and he refers to it as a “trusted friend.” People can use their powerful imagination to create possible alternate...